The purpose of this document is to demonstrate TAS systems’ ability in modelling ice storage systems with relation to the ‘Trane Engineer’s Newsletter Volume 36-3’. This is done by mimicking the examples of ice chillers in the newsletter to show that given results are achievable. TAS Systems has the ability to accurately implement ice storage of any size. TAS can show how energy consumption will differ and also how this will affect the running costs of the cooling system. This can not only be used as a prospective planning tool but also as a means of optimization, by showing how operating the cooling system differently could change the outcome.

Ice storage air conditioning creates ice by the means of a chiller. The ice can then be used at a later time for cooling. Ice can be made at night when electricity is in low demand and does not cost as much lowering the operating costs for the consumer. Ice storage can also mean that a smaller chiller is required. This is because the chiller can work more constantly, allowing the stored ice to be used at peak times when a smaller chiller would otherwise be unable to supply the required cooling. A smaller chiller would be desirable as it will reduce capital costs via any peak load tariffs that may be in effect where the system is based, as well as by reducing the initial purchase price of the chiller. 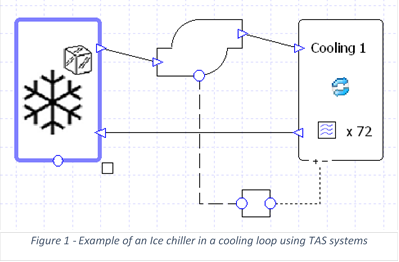 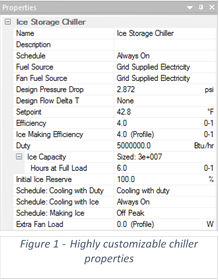 A traditional chiller needs to be sized so that it can always supply enough cooling to the building, even in the hottest days of the year. This leaves the system with an oversized chiller for the rest of the year. Figure 3 shows Trane’s representation of this and Figure 4 shows the results taken from a TAS Systems example. The data in the TAS example is taken from the hottest day of the year. This day decides how big the chiller needs to be sized. As in the Trane example, this size can be specified to be a factor of safety over the required size. 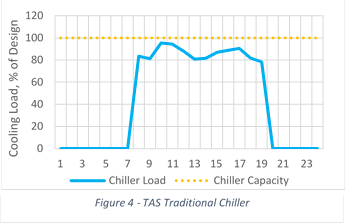 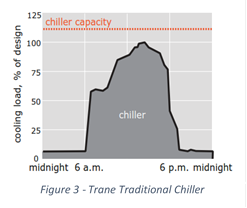 Figures 5 and 6 show how the size of a chiller can be reduced. The implementation of an ice storage chiller means that any required cooling above what the chiller has been sized for can done by the stored ice. This is shown by overlaying the area by which an ice chiller would reduce the peak consumption. A chiller sized at 80% of the original has been used.

Note that the TAS example (figure 6) only has a small load dedicated to making ice in the early hours of the day. This is because there is remaining ice from the previous day of the simulation, meaning that not much needed to be made to fill up the storage.

It is worth noting that when using this strategy, unless the climate is very constant, the ice storage will only be used for cooling in the hottest summer months. More money could be saved by implementing a more complex control strategy that used the stored ice for cooling when it is known that the chiller would not require supplementation when the stored ice runs out. 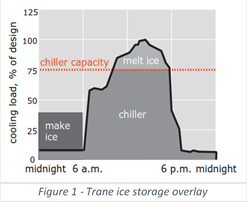 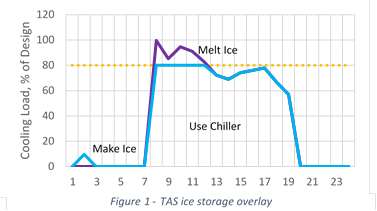 By increasing the system storage size, much of the load can be shifted to the off peak hours where electricity is cheaper. This has the benefit of reducing the overall utilities charges for the system. Depending on how the system is managed this can also reduce the size of the chiller required further. In this case peak charges apply in the afternoon, so the ice that has been created overnight is used to cool the building in the afternoon, when otherwise the chiller would be required to work at a high operating cost. 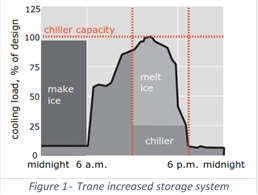 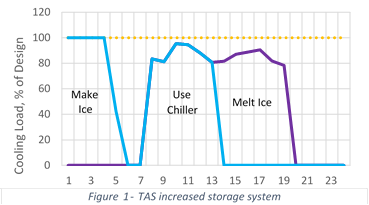 Operating a chiller during off peak hours will save money relative to on peak times. The following graphs show that without ice storage the chiller will be operating near its peak whilst the tariff is at the most expensive. In this case the engineering newsletter outlines that the maximum charge rate lies between 12pm and 6pm. 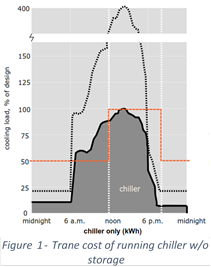 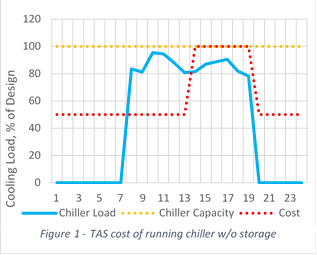 When ice storage has been implemented the chiller need not operate at high loads during times of peak charge. Figures 11 and 12 show how ice can be melted in peak times to avoid the high costs. 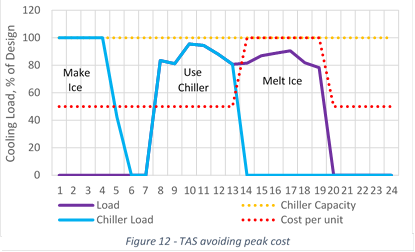 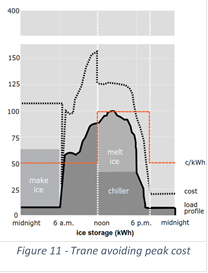 A small example of how an ice storage chiller could be implemented in TAS has been carried out. The building and location taken are in Sydney, Australia, with a fairly sizeable building consuming 7819 MMBtu/year.

It was assumed that peak consumption hours were in the afternoon, when cooling accounts for most of the energy usage in a Sydney office environment. It is at this time that the ice storage is used for cooling instead of employing the use of the chiller.

First a benchmark for the building was carried out with a chiller sized so that it would meet the cooling requirements throughout the year. Then the chiller was reduced in size by 20% meaning that ice storage rated at 2500 Ton-Hrs was implemented in order to meet the extra demand. The chiller size was then increased to the original size but with extra ice storage, 3000 Ton-Hrs. In table 1 it is shown that with each change, despite being an increase in energy consumption, there is significant cost savings.

This saving would also be much greater in countries such as America where there is also a charge for the peak demand usage in both peak and off peak hours. The demand charge is at a rate per kW. This charge would be significantly reduced with ice storage as the chiller will not be used to the same extent during the peak hours, meaning that the charge incurred by the company would be significantly less. An example of this is shown in table 2. From the Trane newsletter it stated that in peak times the demand is $12 per kW whilst off peak the demand is $5 per kW.